The Paraparaumu coast consists of a sandy beach backed by dunes. The shoreline extends west from the rest of the Kāpiti Coast shoreline in a large delta shape due to Kāpiti Island reducing wave energy and promoting greater shoreline growth over the Holocene period (i.e. last 10,000 years). This growth now acts as a natural barrier which traps longshore sand coming from the north and reduces the amount of sediment that travels past to the southern parts of the district. Periodically storms attack the dunes (photo B) and cause them to erode landward. However, good sediment supply to the area means they can usually recover from these episodic events. The dunes along the front of Paraparaumu also provide good flood protection from waves, but the land elevation reduces through the residential area nearing the Waikanae Estuary.

The present-day erosion hazard is what could occur in an extremely large storm (which has a 1% chance of occurring each year in the immediate/ near future). In Paraparaumu this is ‘most likely’ to be around 8 m of erosion, and unlikely to be more than 10 m.

For coastal flooding, in the same sized storm, present-day hazards are localised around Tikotu Stream and the wetlands next to the Waikanae Estuary, including land around the Mazengarb Stream at Makora Road.

B. Dune scarp erosion in 2003 at the northern end of Manly Street 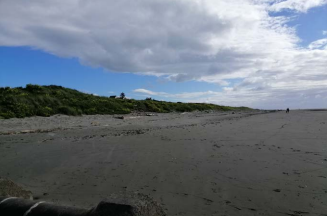 Shoreline growth occurs directly south of Tikotu Stream, with erosion increasing from there in a southward direction

Ground levels along the coastline south of Tikotu Creek are relatively high and above the highest extreme water level with RSLR considered in this assessment.

However, some lower lying areas inland are connected to sea by stormwater drains which provide pathways for flooding. To the north of Tikotu Creek, there are more extensive areas of lower lying land around the Waikanae River and Estuary and its tributary streams and drains.

Isolated areas of low elevation near the drains and streams flowing into the Waikanae Estuary could become inundated. The area around Te Kupe Road and Olive Terrace becomes susceptible to inundation from backflow through the stormwater network and direct inundation from the Kenakena Drain. Some of the smaller stormwater catchments which drain by gravity directly to sea start to become susceptible to inundation.

Around 55 m of Marine Parade is potentially vulnerable to coastal erosion in the next 30 years. Over the next 50–100 years, this could increase to between 200 m and 400 m under the higher RSLR scenarios. The northern end of Manly Street is only likely to be affected by erosion at the highest level of RSLR (1.65 m) for 100 years. 13–20 private land parcels intersect with the ‘most likely’ projected future shoreline position within the next 30 years, 21–54 within 50 years, and 49–119 within 100 years.

For coastal flooding, private and public land parcels are projected to be affected over 30–50 years, with large parts of Paraparaumu Beach being projected to be affected in the high RSLR scenario over 100-years. Sections of Kāpiti Road, a main evacuation route, are likely to start to become susceptible to coastal flooding in extremely large storms in the next 30–50 years.

The components used to calculate a potential coastal erosion distance along the Paraparaumu coastline include:

To assess the coastal flood hazard for Paraparaumu Jacobs mapped the area which is susceptible to flooding by a large storm tide which has a 1% chance of occurring in any year. The maps show the flooding that could occur at the present time and in the future, for RSLR scenarios of +0.4 m; +0.65 m; +0.85m; +1.25m; and +1.65 m. Jacobs used a simple ‘bathtub’ approach, where all land below the storm tide water level is mapped as susceptible to flooding, regardless of connection to the sea. The maps also show areas which could be affected by additional flooding due to wave run-up overtopping the dunes.