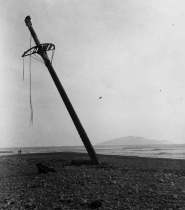 The stone monument at Ōtaki Beach, shaped like a bow of a ship, was erected by the Otaki Historical Society. It commemorates two significant shipwrecks along the Ōtaki coastline and the skill and courage of the people who helped bring passengers and crew ashore.

On October 13, 1878 of the barque Felixstowe (379 tons register, built at Harwick in 1873), became shipwrecked, with the loss of her captain, James Stuart Piggott and three other crew members.

On October 22, 1878 the full-rigged immigrant ship, City of Auckland (780 tons register, built at Sunderland 1869, Captain George Ralls) became shipwrecked at the Ōtaki river mouth. There was no loss of life.