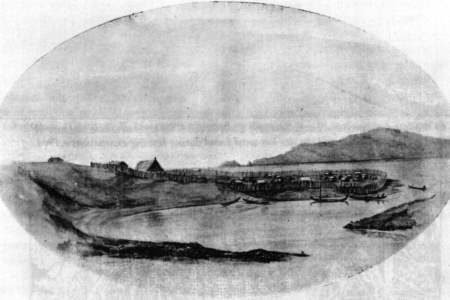 By 1824, many Te Āti Awa people had migrated from Taranaki and built a great pa at Kenakena, with lesser centres at Te Uruhi, Arapawaiti and Waimeha. They were led by Reretawhangawhanga, father of Te Rangitake (Wiremu Kingi). At one time Kenakena had several thousand inhabitants, extensive gardens and a stockade with carved posts.

In 1838, Octavius Hadfield volunteered to be a missionary on the Kāpiti Coast. By 1843, the first church in the region was built on this site.

In April 1848, Wiremu Kingi with 580 Te Āti Awa followers returned to re-occupy their ancestral lands at Waitara, in Taranaki. Later that same year, on 16 October 1848, a severe earthquake lifted the coastline and damaged the Kenakena stockade and church. Most of the remaining people of Kenakena moved to a new settlement at Tuku Rākau, north of the Waikanae River. By 1854 windblown sand dunes had buried the site of the church and pa.